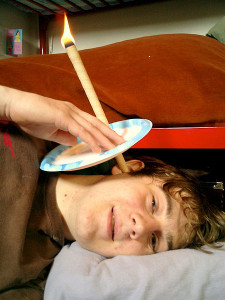 What are Ear Candles?

Allegedly, ear candles were used in China, Egypt, Tibet, by the Hopi Indians in America, and even in Atlantis!

Ear-candling entails placing a hollow candle into the ear of the patient and lighting the far end of the candle, which then burns slowly over about 15 minutes. This generates mild suction and is supposed to stimulate energy points. Thereafter, the candle is extinguished and the content of the near end of the candle is usually displayed for inspection. Many therapists inform their patients that the remnant left behind at the end of treatment is ear wax, suggesting that it has been drawn out of the ear through the ‘chimney effect’ produced by the burning candle.

Ear-candling is used for the removal of ear wax and for the treatment of hay fever, headaches, sinusitis, rhinitis, colds, influenza and tinnitus. It is even claimed candling can lead to ‘sharpening of mental functioning, vision, hearing, smell, taste and colour sensation’.

There is no shortage of anecdotes published to promote the use of ear candles. However, a series of experiments concluded that ear candles do not eliminate any substance from the ear.

A study conducted in 1996 by Spokane Ear, Nose, and Throat Clinic in America showed that a burning candle does not produce any negative pressure at all, and that the deposit is, in fact, candle wax. Indeed, the same group of researchers also demonstrated that instead of removing ear wax, ear candles leave a deposit of wax in volunteers who, prior to the experiment, had no ear wax.

There is no evidence that candling is effective in the treatment of any of the other conditions mentioned above.

Ear candles are not free of risks: burns, occlusion of the ear canal and perforations of the eardrum are on record. There are also cases of house fires resulting from candling sessions.

In light of these risks and the lack of evidence, ear-candling is a treatment that should be avoided.