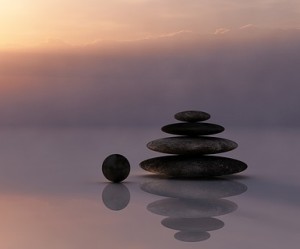 Meditation covers a range of techniques that direct the subject’s attention to a symbol or sound or thought in order to achieve a higher state of consciousness. Most religions have developed techniques that bring about altered states of consciousness. They may include repeating a mantra or listening to one’s own rhythm of breathing. Such rituals can lead to a deep relaxation and mental detachment. This ‘relaxation response’ can also be used therapeutically for reducing stress, which, in turn, can bring about other health benefits such as lowering blood pressure or pain control. Meditation is normally taught in a series of sessions; subsequently patients who have mastered the technique are requested to practise on a daily basis.

During the meditative state, a range of physiological functions are altered. For example, respiratory rate and heart rate are slowed, and brain activity is reduced. Proponents of meditation claim to treat conditions such as anxiety, hypertension, asthma or drug dependency.

Certain forms of meditation (e.g. Transcendental Meditation) have strong religious associations and may be part of larger systems of beliefs and practices that patients may not feel is appropriate. For example, Hinduism is the most ancient religion to advocate meditation as a spiritual practice. ‘Mindfulness Meditation’ is an approach which has been developed purely for therapeutic purposes and does not raise such issues.

Research into meditation is scarce and often seriously flawed. Truly independent evaluations are rare. Nevertheless, it seems likely that meditation offers many of the benefits associated with relaxation. Some alternative therapists suggest that meditation can have a direct impact on serious conditions, such as cancer, but there is no evidence to support such claims.

Some reports suggest that mental illnesses can be exacerbated through meditation, so patients with such problems should not use it. In conclusion, meditation can be relaxing and thus increase well- being. In this way it can prove to be useful for many people. In the absence of mental illness, it seems to be a safe form of therapy.