Have your say on NHS Homeopathy funding in Enfield

Conservation of a conversation that is now part of mathematical folklore 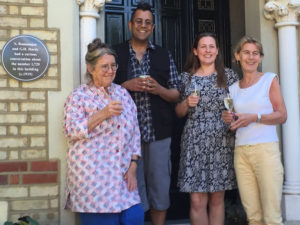 On Sunday 15 June, mathematicians and local residents gathered to celebrate a new commemorative plaque, marking one of the most remarkable conversations to have taken place in Putney. Indeed, it is of such historic importance, that this conversation has been featured in feature films, plays, novels and TV shows.

The conversation concerns the great English mathematician G. H. Hardy, who was visiting his Indian colleague Srinivasan Ramanujan, who seemed to have a natural gift for understanding numbers. Despite coming from a poor family and not having been to university, Ramanujan created brilliant mathematics out of thin air, which is why Hardy arranged for the prodigy to join him in Cambridge. It was a glorious partnership, but Ramanujan struggled with his health and in 1919 he found himself in a nursing home at 2 Colinette Road, Putney.

That, according to Hardy, is where the famous conversation took place: “I remember once going to see him when he was lying ill at Putney. I had ridden in taxi cab number 1729 and remarked that the number seemed to me rather a dull one, and that I hoped it was not an unfavourable omen. ‘No,’ he replied, ‘it is a very interesting number; it is the smallest number expressible as the sum of two cubes in two different ways.’”

If you did not follow the intricacies of that mathematical dialogue, then the important point is that this brief exchange demonstrated Ramanujan’s incredible familiarity with numbers and their properties. The so-called 1,729 conversation is now part of mathematical folklore.

The nursing home is now the home of Mrs Deborah Gauld, who was approached by Simon Singh, a science writer and founder Good Thinking, a charity that promotes science. Dr Singh, together with Sarah Hart of the British Society for the History of Mathematics, suggested putting up a plaque to mark this site of mathematical interest, and friends, neighbours and representatives of the London Mathematical Society gathered to celebrate the plaque and the partnership of Hardy and Ramanujan.

This article is also available at http://www.putneysw15.com/default.asp?section=info&page=con1729001.htm.