Good Thinking will be awarding The Golden Duck each year to the person (or organisation) that has supported or practised pseudoscience in the most ludicrous, dangerous, irrational or irresponsible manner. The decision is based on nominations by the public, followed by short listing and then finally a vote among skeptic groups.

The award will have different criteria each year, and for our first outing we have decided to offer a lifetime achievement award open for any quack from any discipline – the winner may come from medical quackery, or indeed politics, business, TV and media and beyond.

We need your help to find the 2012 winner. We’d like you to nominate your favourite British quack (still alive, as this award, like the Nobel Prize, cannot be given posthumously). Just fill in the form below and tell us who deserves a lifetime achievement award for quackery

A shortlist of nominees will be sent to Skeptics in the Pub groups around the country. Already over twenty SitP groups have agreed to be involved. If you run a SitP group and would like to join them, then please get in touch before 1st October.  Each Pub will hold its own local vote and send its results back to Good Thinking HQ in true Eurovision style. The winner will receive the delightful statuette pictured here.

So, get thinking and start nominating. Closing date for nominations is the 1st October 2012.

Sorry – nominations are now closed for the 2012 Golden Duck.

The Golden Duck is to be presented to a quack on an annual basis. A quack is a person (or organisation) who promotes pseudoscience, usually because he/she/it is deluded and/or unaware of the relevant scientific principles and/or unable to grasp the necessary scientific concepts. Although the shortlist is drawn up from the nominations by Good Thinking, the final decision is to be made by a popular vote. The winner is to be the most popular (or perhaps that should be least popular) quack.

Prince Charles is nominated for using his position to consistently promote pseudo-science.   He founded and was closely involved in the Princes Foundation for Integrated Health, which closed in 2010. For 19 years it misinformed the public about alternative therapies such as homeopathy and Reiki[1]. The College of Medicine, founded in October 2010[2], appears to …

Andrew Wakefield is nominated for the harm caused by his discredited research into the supposed link between the MMR vaccine and autism.   In 1998, Wakefield was lead author of a research paper (co-authored by 12 other scientists) on a dozen children with autistic spectrum disorders who had been admitted for bowel problems. According to …

David Tredinnick is nominated for being the most active supporter of alternative therapies in Parliament.   Elected as Conservative MP for Bosworth, he has held his seat since 1987. He was involved in one of the sleaze stories that helped sink the Major government – he accepted £1,000 from an undercover reporter to ask parliamentary … 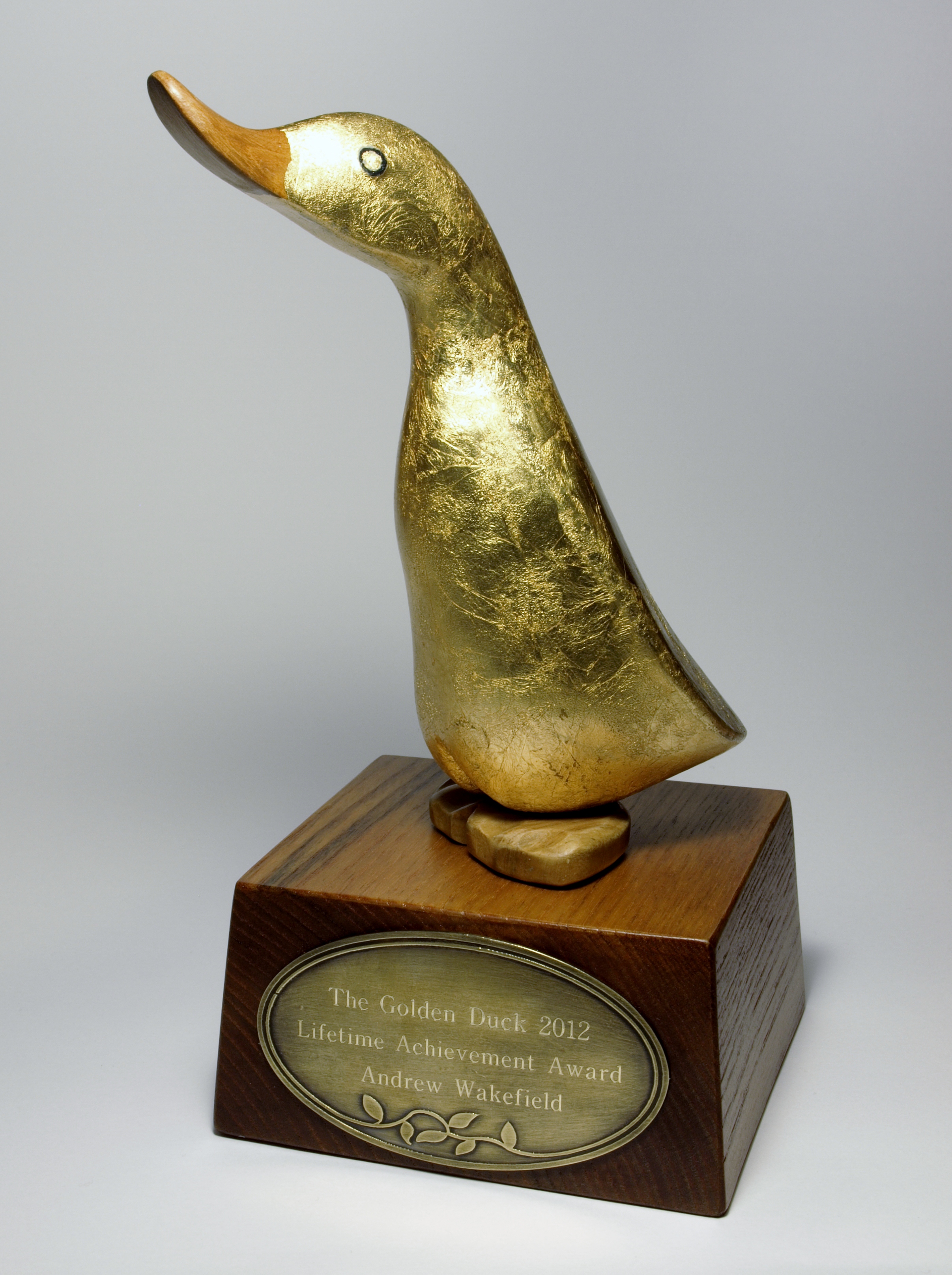 Andrew Wakefield, who sparked the unjustified MMR controversy, wins the Golden Duck Lifetime Achievement Award for his contribution to quackery. Good Thinking launched its annual Golden Duck award for quackery in 2012, which seeks to recognize those who have supported or practised pseudoscience in the most ludicrous, dangerous, irrational or irresponsible manner. It was decided …

*** Nominations are now closed *** After last year’s Golden Duck Award, which helped us lifetime contributions to quackery, we considered offering a politically-themed Golden Duck Award for 2013. To a large extent, the British Parliament is a scientific black hole, populated in the most part by non-scientists who use ideology to trump evidence when …