In February 2015, The Good Thinking Society, working with Bindmans LLP, wrote to Liverpool CCG in order to highlight and challenge the CCG’s decision to approve spending on homeopathic treatments – a decision we believe to be unlawful, and contrary to the best interest of local patients. Since then, we have been challenging spending on homeopathic treatments on the NHS, in Liverpool and around the country.

Latest from our campaign:

Why are we challenging NHS homeopathy funding?

It is a duty of local Clinical Commissioning Groups (CCGs) to ensure NHS funds are spent as effectively and responsibly as possible. This is particularly important in the current financial climate, as NHS budgets are under enormous pressure. For that reason, we invited Liverpool CCG to reconsider whether the money they spend each year on homeopathy – a ‘treatment’ which has been thoroughly demonstrated to be neither clinically-effective nor cost-effective – represents good service to the patients and taxpayers of Liverpool. We welcome the CCG’s decision to take a fresh look at this issue, starting with a further public involvement exercise after the election.

If the current level of spending by Liverpool CCG were to have continued, over £350,000 would be wasted on homeopathy within a decade. Every penny spent on treatments which do not (and cannot) work is money that could be far better spent elsewhere – for example, on providing effective treatments, funding worthwhile care initiatives and employing more nurses, doctors and counsellors.

As it stands, every patient around the country whose operation is delayed or treatment is denied due to budgetary concerns can look with frustration to the money being wasted on homeopathy. The Good Thinking Society would rather see limited NHS resources spent on evidence-based medicine rather than on continued funding of homeopathy, which has been condemned by the British Medical Association, the Chief Medical Officer, the House of Commons’ Science and Technology Select Committee and the Government’s Chief Scientific Advisor. Indeed the lack of evidence to support homeopathy is even highlighted by the NHS. It is encouraging to see Liverpool CCG take a first step by agreeing to properly consider the best evidence and expertise on this issue.

The concept of patient choice is obviously important, but it is crucial that this choice is an informed one. The best evidence has conclusively shown that homeopathy is not an effective treatment, and to continue to offer ineffective treatments under the guise of patient choice raises troubling questions about the important concept of informed choice, and indeed of informed consent.

Good Thinking were represented by Salima Budhani and Jamie Potter of Bindmans LLP.  Salima said: “This case underlines the necessity of transparent and accountable decision making by the controllers of health budgets, particularly in the light of the current financial climate in the NHS.  CCGs have legal obligations to properly consider relevant evidence, as well as the views of experts and residents, in deciding how precious NHS resources are to be spent.  It is essential that commissioning decisions are rational and evidence-based.  Liverpool CCG’s decision to reconsider its position on the funding of homeopathy in these circumstances is to be welcomed.

“Our client has also called upon the Secretary of State for Health to issue guidance on the funding of homeopathy on the NHS.  Public statements by the Secretary of State indicate that he does not support ongoing funding, yet he has so far declined to ask NICE to do any work on this issue.  The provision of such guidance would be of significant benefit to CCGs in justifying decisions to terminate funding.”

Commenting on their decision, a Liverpool CCG spokesperson said: “Liverpool CCG currently resources a small homeopathy contract to the value of £30,000 per year that benefits a small number of patients in the city who choose to access NHS homeopathy care and treatment services. The CCG has agreed with the Good Thinking Society to carry out further engagement with patients and the general public to inform our future commissioning intentions for this service.”

Over the last two decades, prescriptions fulfilled in community pharmacies for homeopathy on the NHS in England have fallen by over 94% and homeopathic hospitals have seen their funding reallocated. This reduction in homeopathy spending indicates that the overwhelming majority of doctors and commissioning bodies have acted responsibly by terminating funding for homeopathic treatments. Our positive result in this case helps the NHS bring an end to funding for worthless homeopathic treatments now and in the future – allowing limited NHS funds to be spent where they can better benefit the patients of Liverpool.

» Donate now to support our campaign on Just Giving

“Homeopathy is not supported by evidence — it is implausible, disproven, wasteful and often dangerous. Enthusiasts of homeopathy tend to quote ‘patient choice’ as an argument to have it on the NHS, but this notion is as bogus as homeopathy itself. Patient choice must always be a choice between treatments that are backed by evidence; if not ‘choice’ degenerates into little more than ‘arbitrariness’.”

“The NHS is a key issue in the upcoming election, and all the parties agree that the NHS should spend its budget in ways that will offer the most benefit to patients. Our successful legal challenge gives Liverpool CCG the opportunity to stop wasting money on homeopathy and instead to help patients by investing in real medicine.”

“Wasting scarce NHS resources on treatments which have absolutely no robust evidence base is an insult to hard-working doctors who pride themselves on using scientific knowledge and clinical judgement to make the best use of the NHS’s money. It could also send a very dangerous message, that homeopathy might be a real alternative to proven medications.”

“It’s more important than ever that we use NHS funds to provide effective, safe care. Homeopathy isn’t more effective than placebo, and it’s wrong that we continue funding it as though it is. I hope that we can use the money currently being spent on ineffective treatments to care for patients in better ways.”

“At least the grown-ups have finally taken charge and have insisted the decision is reviewed. Let’s hope those with medical training, economic literacy and fiscal responsibility manage to defeat the gullible for whom populism and pseudoscience seems to be of more concern than the health outcome of their communities and patients.”

Mike Hall, President of the Merseyside Skeptics Society and 10:23 Campaign

“Homeopaths have claimed that skeptics reject homeopathy because we don’t understand how it works. While the proposed mechanism of homeopathy is indeed nonsensical, we do not reject it for this reason. We reject it because in 200 years it has never been shown to have a reliable effect on the course of any medical condition. With an ageing and expanding population, it is right and proper to insist that our NHS funds only those treatments with a proven benefit for patients.”

“There can be no excuse for wasting NHS resources or deliberately deceiving patients with ‘treatments’ which have been shown to have no benefit. 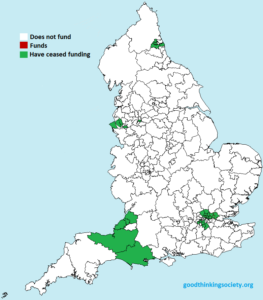