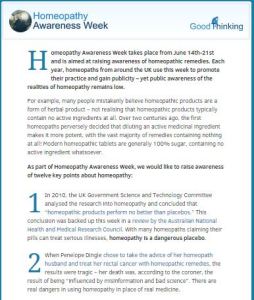 Each year homeopaths around the world declare a week to be ‘Homeopathy Awareness Week’ – their opportunity to tell the world about the extraordinary things they believe homeopathy can do.

In previous years these weeks proved to be relatively successful, with celebrity endorsements and positive press coverage touting the benefits of homeopathy. Of course, missing from much of the coverage was any real information about homeopathy, such as the lack of evidence and the risk of harm in choosing homeopathy over real medicine. Perhaps this is because homeopaths don’t really want people to have a genuine awareness of homeopathy. Maybe they merely want to encourage vague familiarity with homeopathy – enough to know the name, but not the pseudoscience behind it.

For this reason, during 2014’s Homeopathy Awareness Week we launched our own awareness-raising site, www.homeopathyawarenessweek.org. On it we listed the twelve most important facts we believe people should know about homeopathy, but were missing from the official coverage. Over the course of Homeopathy Awareness Week 2014 our site reached more than 77,000 readers, becoming the top Google hit for ‘homeopathy awareness week’ (higher, even, than official sites) and gaining coverage in the Guardian and Boing Boing.

We believe that raising real awareness of homeopathy poses the biggest threat to its ongoing acceptance, as people discover for themselves that the treatment has no satisfying answers to even the most basic of questions. For this reason, when homeopaths run their awareness weeks in the future, we’ll be encouraging skeptics to do their part towards raising awareness of homeopathy by sharing our site and other sites which show the real facts about homeopathy. Follow us on Twitter to find out when the next homeopathy awareness week is, and to show your support.