What is Leech Therapy? 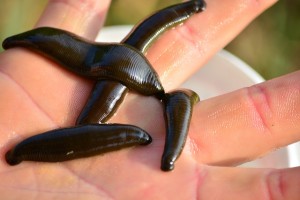 Hirudo medicinalis is a small, black, worm-like animal capable of attaching itself to humans or animals, sucking substantial amounts of blood from the skin. During this process, it increases considerably in size and finally, when it is saturated with blood, it drops off.

Leeches were used for medicinal purposes in ancient Babylon, and in more recent centuries in Europe as a mode of bloodletting. Today their only use in conventional medicine is in plastic surgery: clinical trials show that applying leeches post-operatively improves the cosmetic results of some operations.

In alternative medicine, leeches are employed for a range of conditions. Some therapists believe that they eliminate toxins from the body; others use them to treat painful local conditions such as osteoarthritis.

While sucking blood, leeches inject pharmacologically active substances into the body. Initially they inject an anaesthetic sub­stance which enables them to bite through the skin without causing pain. Subsequently they excrete a substance that prevents blood from clotting so that they can suck blood easily. This substance is called hirudoine and is a well-researched anticoagulant. It can now be synthesized and is used widely in mainstream medicine for its anti­coagulation properties.

A German group published a series of clinical trials which suggested that the application of several leeches over the knee eases the pain of osteoarthritis. These studies still await independent replication. All other claims of the alternative use of leech therapy are unsupported by evidence.

If done properly, there are few risks. Many patients, however, might feel uncomfortable about leech therapy, either because of the aesthetic aspects of the treatment or the fact that, after one session, the animals are usually destroyed.

In summary, leeches have a long history of medical use. There is some evidence that their use is effective in reducing the pain of osteoarthritis of the knee. There is no evidence to support their use for any other treatment performed by an alternative therapist.