Are you thinking about trying Live Blood Analysis? 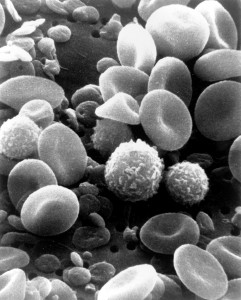 However, there is no good evidence that live blood analysis practitioners can offer reliable diagnoses or effective treatments.

What is Live Blood Analysis?

Live Blood Analysis is also known as live blood testing, nutritional microscopy, live cell analysis and hemaview. Practitioners like Robert O Young, the US-based live blood analyst and teacher, believe that many illnesses are caused by acidity in the blood, which may be “reversed” by following an “alkaline” diet.

Crucially, practitioners believe that it is vital to look at samples of blood immediately after the sample is taken, while the blood is still “alive”, as opposed to sending samples away for analysis. By making immediate “live” observations, they believe all manner of problems can be seen under a microscope.

Robert O. Young claims that in an acidic environment, blood cells transform into new organisms including bacteria, yeasts and parasites. This belief originates from the early 20th century theory of pleomorphism – an idea which has long been proven to be incorrect.

Practitioners of live blood analysis often mistake normal blood behaviour as evidence of serious illness. For example, If the red blood cells appear to be stacked on top of one another (in “rouleaux” formation), practitioners will claim that this is caused by dangerous levels of blood acidity, rather than a more obvious explanation, such as the blood sample having dried out on the slide.

Perhaps even worse, live blood analysts can misidentify glass or dirt on microscope slides as uric acid crystals or parasites in the blood. Some practitioners even claim to see bacteria or yeasts “budding off” the edges of red blood cells – an idea which makes no medical sense, and which is biologically impossible.

While the first and second risks will cause anxiety and financial loss, the third risk can lead to a delay in finding a correct diagnosis and appropriate treatment.

In 1995, Robert O Young was charged with two felony counts of practising medicine without a license. He pleaded guilty to a reduced misdemeanour charge. In 2001, Young was charged with a further felony after a cancer patient claimed he had told her to stop chemotherapy and take his “Super Greens” product instead. This charge was dropped as the prosecutor felt not enough victims had come forward to secure a conviction. In January 2014, Young was arrested again, accused of 18 felony charges, including practising medicine without a license and grand theft.

In 2014, in the UK, practitioners Errol Denton and Stephen Ferguson were successfully prosecuted for breaches of the Cancer Act (1939), which prohibits advertisements offering to treat or cure cancer. Errol Denton, who had been trained by Robert O Young, was found guilty of nine offences and ordered to pay a total of £19,101 in fines and prosecution costs, while Stephen Ferguson was fined £1,750 after he had advertised protein shakes and vitamin supplements as treatments for cancer, arthritis and diabetes.

Over the last 20 years there is no shortage of similar cases, as regulators recognise and restrict this dangerous practice. In 1996, Pennsylvania state health officials restricted the practice after Dr Stephen Barrett filed complaints against three chiropractors. In 2005, the Rhode Island Department of Health ordered a chiropractor to stop performing live blood analysis. In 2008, an Australian naturopath who had been acquitted of manslaughter was banned for life for providing a range of alternative health services including live blood analysis. The UK Advertising Standards Authority has upheld a number of complaints against practitioners, some of whom are now listed as “non-compliant online advertisers”.

For more information about live blood analysis, we suggest visiting the links below and speaking to your GP.