‘Cancer – There is Hope’ seminars reported to Trading Standards

Halloween marks the end of Psychic Awareness Month for the Good Thinking Society, arranged as a show of support for Mark Tilbrook. Since our project began at the start of October, we have helped organise the quiet, polite leafleting of 27 shows throughout the month – including 12 shows from Sally Morgan, 10 shows from Colin Fry, 4 from Derek Acorah and one Tony Stockwell show. 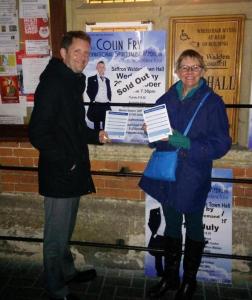 We’re happy to report that Tony Stockwell’s management team took the time to thank our leafleters for their polite and respectful manner, and Colin Fry on a number of occasions gave leafleters complementary tickets to his show as a gesture of goodwill. Sally Morgan’s team, too, provided no further obstacle, beyond telling us we were “lucky not to have been thrown under a train” and that it was “lucky we were still able to walk” in Watford on October 1st.

Good Thinking, along with Mark Tilbrook, would like to extend our sincere thanks to everyone who helped us share our message throughout the month, including members of skeptical groups in Birmingham, Bournemouth, Cambridge, Eastbourne, Greenwich, Glasgow, Hampshire, Maidstone, Merseyside, Nottingham, Portsmouth and Plymouth who handed out leaflets. We’d also like to say a special thank you to the Norwegian Skeptics, who helped organise leafleting outside of 4 shows during Colin Fry’s Norwegian tour.

Throughout the month, coverage of our project and the incident that triggered it has been widespread, including articles in the Independent, the Guardian, the Daily Mail and the Mirror. The video of John Morgan and Daren Wiltshear confronting Mark Tilbrook, published by Boing Boing, has amassed over 150,000 views.

As a result of our shedding light on the behaviour of John and Daren, Sally Morgan removed both from her team, stating that neither will attend any of her shows in the future – a proposition we’re watching with interest. Both John and Daren have since issued personal letters of apology to Mark Tilbrook.

We aren’t currently planning to use our leaflet at any future shows, as our activism is currently focused in different directions. If you’d like to be part of future activist projects of ours, similar to Psychic Awareness Month, you can sign up as a volunteer. And if you have any project ideas of your own, regarding psychics or any other form of pseudoscience, we’d be happy to discuss them with you.

Psychic Awareness Month began in response to the laudable actions of one man, Mark Tilbrook, who found he had a community to rely on for solidarity and support – without the help he received from skeptics around the country, it would have been much harder to provide people with information to think critically about the claims of psychics.