Over the last six months, we have been investigating ‘faith healer’ Peter Popoff and his highly-lucrative current business of promising to heal sickness and cancel debts in exchange for ‘seed faith’, in other words: cash donations. In May of this year we attended Popoff’s event at The Troxy Theatre, London, to covertly record his miraculous claims and supposed acts of faith healing, and to witness thousands of people donating large amounts of cash to his ministry.

Today’s Sunday Times features a report on our six-month investigation into ‘faith healer’ Peter Popoff . As the Sunday Times reports: 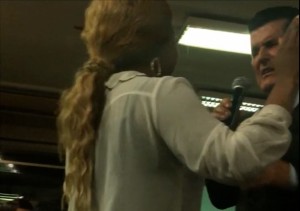 AN AMERICAN preacher and faith healer exposed for exploiting the vulnerable and sick has set up a British operation offering a “miracles for cash” service to wipe out the debts of householders.

Peter Popoff, whose US church once raised millions of dollars a year, was bankrupted in the 1980s after he was caught using a hidden earpiece to enable him to call out the ailments and home addresses of those he was treating at faith healing services. His trickery partly inspired Leap of Faith, the 1992 comedy film starring Steve Martin, and a subsequent Broadway show.

Popoff, 69, has since rebuilt his career and expanded operations to the UK. Last May, he hosted a “spiritual event” at a London theatre but now faces claims that he is offering “miracle money manifestation” in exchange for cash.

The full Sunday Times article can be read in today’s edition, and subscribers to the paper can read it online.

We will be publishing more of our six-month investigation tomorrow, including footage recorded at Popoff’s May 2015 event in London.