The Parallel Project is back 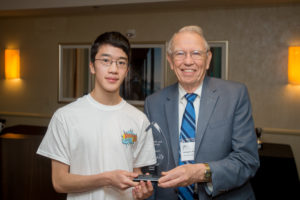 Yuji Okitani, the winner of our UK Who Wants to Be a Mathematician competition, competed in the international Grand Final in the US last Saturday, finishing a very respectable third place in his semi final.

The competition, which is run by the American Mathematical Society and took place live at the 2018 Joint Mathematics Meetings in San Diego, saw Yuji take on 11 contestants from across the US and Canada, with Samuel Goodman from Las Vegas crowned the eventual winner.

Yuji, the first ever competitor from the UK to take part in the final, wins $750 for his final placing, plus an additional $750 goes to his school, Tapton School in Sheffield.

Michael Breen, Public Awareness Officer at American Mathematical Society, said: “The AMS and all the mathematicians in attendance were very impressed by the quality of the contestants. This was a very intelligent group of students, who competed in a spirited and friendly manner. 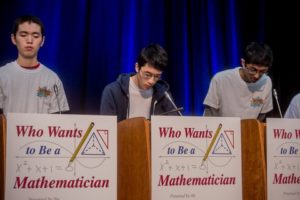 Yuji in action, during the final.

“We were delighted to welcome students from the UK for the first time and thank the UK teachers for participating and the sponsors, the Good Thinking Society and the University of Southampton, for making it possible.”

The UK leg of Who Wants to Be a Mathematician is organised by Good Thinking, with competition sponsorship from the Maths Department at the University of Southampton. You can find out more about this world class maths department by visiting their website.

Qualifying for next year’s competition, which will take place at the 2019 Joint Mathematics Meetings in Baltimore, begins in September. If you would like to enter your school in the next Who Wants to Be a Mathematician, email marsh@goodthinkingsociety.org to be added to our mailing list and to receive entry details as soon as they become available.

Yuji Okitani, alongside his 11 fellow finalists, in the Grand Final of Who Wants to Be a Mathematician