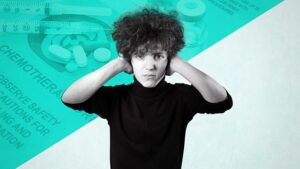 The documentary investigates the alternative cancer ‘cure’ industry, and Good Thinking has been working with the BBC since September last year to share our understanding of the therapies and treatments promoted to cancer patients.

In particular, the documentary focuses on the stories of Sean Walsh – a young musician from Liverpool who crowdfunded his alternative cancer treatments – and Linda Halliday, whose family Good Thinking has been in contact with since 2015.

Journalist Layla Wright followed Sean’s journey on social media as he attempted to heal himself, and for a while, it seemed to be working. He raised thousands of pounds to fund his treatment, and beat the doctor’s prognosis. But in January 2019 Sean died, and his family believe alternative treatments cost him his life.

Through the testimony of those closest to him, and through his own words, Layla explores why Sean– and many others– took this approach. She meets the family of Linda Halliday who also relied on thermography scans for reassurance that alternative treatments were working, and investigates the clinic that provided them.

The documentary includes undercover footage taken at a thermography clinic, run by homeopaths who have claimed to be able to reverse cancer using homeopathy and dietary supplements, and who claim that biopsies and mammograms actually spread tumours.

“The families of Linda Halliday and Sean Walsh have shown tremendous strength and bravery to come forward and tell their stories – stories that alternative medicine practitioners would prefer you do not hear.

“The BBC investigation perfectly demonstrates how people in a vulnerable position can be drawn into an ecosystem of extreme diets, supplements, coffee enemas, herbal balms and homeopathic remedies, and how ineffective thermography scans give patients a false sense of the progress of their disease.

“The alternative cancer industry rife with dangerous misinformation, where false claims lead very ill people to make tragic decisions about their health. Clearly, not enough is being done by regulators and the law to protect people from such dangerously misleading falsehoods, and until sufficient safeguards are put in place, people will continue to be misled by the seductive claims of the cancer ‘cure’ industry.”

Layla Wright, the BBC journalist who made the documentary, has done an extraordinary job of bringing to light the tragic reality faced by so many cancer patients who turn to alternative medicine, and whose stories usually go sadly unreported.

We highly recommend watching the 30-minute film, which is currently available to watch on the BBC website.