Our concerns about “Inside Harley Street” alternative therapies

Earlier this month, we worked with Tom Bruce from Brighton Skeptics in the Pub in order to investigate the Spirit of Health Conference, which took place on the 4th of May in Sussex. Today, the Daily Telegraph have reported extensively on Tom’s findings and video recordings:

Cancer patients are being offered “fake cures’” by unscrupulous alternative medicine practitioners, the Telegraph has discovered amid calls for a criminal inquiry.

Experts say claims being made by a number of practitioners appear in breach of laws designed to protect the vulnerable from false claims about cancer.

Undercover footage obtained by this newspaper shows a series of practitioners telling cancer sufferers that their condition could be cured using treatments which experts say do not work and are “extremely dangerous”.

They include black salve, a highly caustic solution, as a cure for throat and skin cancers, a salt treatment for lung cancer, and the use of industrial-strength bleach to treat autism, Ebola and HIV.

The Telegraph obtained footage of an event in Sussex earlier this month on May 4, at which alternative medicine practitioners repeatedly told elderly and vulnerable cancer patients that the products could cure their diseases.

They were told that the treatments offered “a 100 per cent cure for any sort of skin cancer” and could work to treat throat cancer. 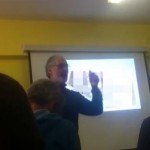 The Spirit of Health event was originally planned to include an appearance from Jim Humble, founder of Miracle Mineral Solution. Humble’s appearance was eventually cancelled after Stuart Barker and Catherine Jones from Eastbourne Skeptics in the Pub group highlighted to potential venues the nature of the conference and the harm such health misinformation presented to the public.

However, the rest of the event proceeded as planned, including telling attendees that cancer is a fungus which can be treated with bicarbonate of soda injections and that diabetic patients needn’t take insulin or be overly concerned with their diet. On one occasion, an attendee in remission after suffering from throat cancer was told that his regular check-up appointments were unnecessary. It’s hard to overstate the potential for harm in such advice.

The dangerous misinformation at the Spirit of Health event was highly shocking, particularly with regard to serious conditions such as cancer and diabetes. Not only do we have people without the appropriate specialised medical training claiming to treat and cure these conditions, but the event also suggested that highly dangerous substances such as black salve and industrial bleach could be used as treatments. It is for precisely this reason that we advise people with health concerns speak to someone with legitimate qualifications, otherwise they put themselves at the mercy of unproven, disproven and potentially harmful treatments.

There is a worrying trend over the last few years for conferences that promote cancer treatments, and these conferences may break the 1939 Cancer Act, which states that no practitioners may advertise any treatment as a cure for cancer. It is extremely important that Trading Standards investigate these conferences in order to protect the public from wasting their money and endangering their health with ineffective and often dangerous ‘treatments’. If Trading Standards are unable or unwilling to investigate claims such as these, perhaps it ought to be a matter for a police investigation.