Anti-vaccination claims by homeopaths exposed across the UK media 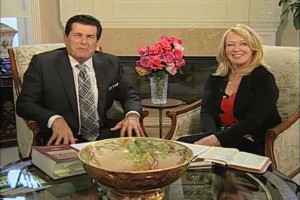 Ofcom have fined Greener Technology Limited, the broadcaster behind BEN TV, £25,000 for airing promotions for Peter Popoff – the teleganvelist and would-be faith healer who we investigated in 2015.

In the infomercials, Popoff advertises his ‘miracle water’, which he has claimed will bring viewers health, happiness and great wealth. During the programme, aired on BEN TV, testimonials claimed, or strongly implied, that the ‘miracle water’ can be used to cure serious illnesses, including cancer.

Once a viewer contacts Popoff’s company to get their free sample of ‘miracle water’, they find themselves bombarded by letters which claim to include specific and personalised prayers and predictions, and which solicit large sums of money from the recipients.

Back in 2016, as part of our own investigation, we published the full range of letters Popoff’s team sent our contacts, in which he solicited more than £2,000 over the course of more than 35 letters in a single year.

Our investigation found that Peter Popoff Ministries – a programme featuring footage from televangelist Peter Popoff’s religious services – contained frequent invitations for viewers to order “free miracle spring water”. The programme included a number of testimonies from individuals who claimed, or strongly implied, that using the water had cured serious illnesses, including cancer.

We concluded that the claims made in the programme had the potential to cause harm to members of the audience who may have been led to believe that the “miracle spring water” alone was sufficient to cure their health conditions and that it was unnecessary to rely on, or continue receiving, conventional medical treatment.

We concluded that Greener Technology Limited did not take steps to provide adequate protection for such viewers and that there was a material risk that susceptible members of the audience may have been improperly exploited by the programme. We also concluded that the programme promoted a product – the “miracle spring water” in breach of the Broadcasting Code.

As part of the ruling BEN TV must broadcast a statement written by Ofcom about their findings, and they must not air Popoff’s programming again.

The ruling by Ofcom echoes a similar ruling in Iceland in 2016, after complaints by Good Thinking. We highlighted Mr Popoff’s misleading claims were being broadcast across Europe by a broadcaster based in Iceland.