Andrew Wakefield, who sparked the unjustified MMR controversy, wins the Golden Duck Lifetime Achievement Award for his contribution to quackery. 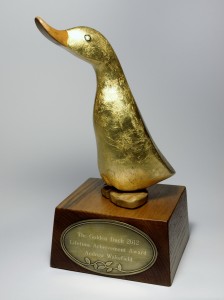 Good Thinking launched its annual Golden Duck award for quackery in 2012, which seeks to recognize those who have supported or practised pseudoscience in the most ludicrous, dangerous, irrational or irresponsible manner. It was decided that the inaugural award should be for lifetime achievement in any field, and the winner is Andrew Wakefield. His nomination statement can be found here…

A public call for nominations in September resulted in Andrew Wakefield and Prince Charles receiving most votes, and they were joined on the short list by David Tredinnick MP. The final decision was left to Skeptics in the Pub (SitP) groups, a network of people who support science and rational thinking around the UK. Twenty-one SitP groups held votes during their meetings in November and December, and the final result was:

We tried to contact Andrew Wakefield but as yet he has not responded. His inscribed winner’s statue is waiting to be despatched as soon as he sends us an address to which he wants it sent.

On hearing the results, Adam Finn, Professor of Paediatrics, University of Bristol commented: 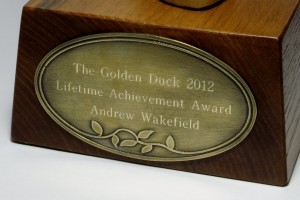 …the widely-reported doubts of one rogue doctor punched a massive hole in public confidence in one of our safest and most effective vaccines against measles mumps and rubella.

“…in handing the wooden spoon, or rather Golden Duck, to one who got it so badly wrong, let’s remember for a moment the countless millions worldwide who are now alive and healthy because of vaccines. Only for a moment – then get on with our busy lives and leave vaccines to do their job in the background.”

The association between ant-vaccination groups and those who lobby for alternative medicine is worryingly strong and highlights one of the prominent dangers of quackery.The combination of Andrew Wakefield and Prince Charles as the two main Golden Duck contenders is therefore most appropriate. Both have done untold harm to public health, and it is time to (dis)honour them for their activities.”

Crispian Jago of Winchester Skeptics in the Pub had this to say about the voting process:

We were very keen to team up with the Good Thinking Society to help choose the winner of the inaugural Golden Duck.

“All candidates fared well in the voting, but it became clear that the one thing the good thinking people of Winchester really can’t stand is a doctor who blatantly abandons and abuses the scientific method.”

Looking at this year’s award and also to the future, Simon Singh of Good Thinking said:

Although David Tredinnick MP came third, there were many who felt that he deserved to have a lifetime award for quackery. It is particularly worrying that he sits on the Commons Health Select Committee and supports homeopathy and astrology. Perhaps that is why he has become known as the “Right Hon. Member for Holland and Barrett”.

“Another politician acting irrationally is Health Secretary Jeremy Hunt, who is another enthusiastic supporter of homeopathy. In light of this, I suspect that next year the Golden Duck Award will be for quackery in politics. We will be looking out for pseudoscience in Westminster and beyond.”